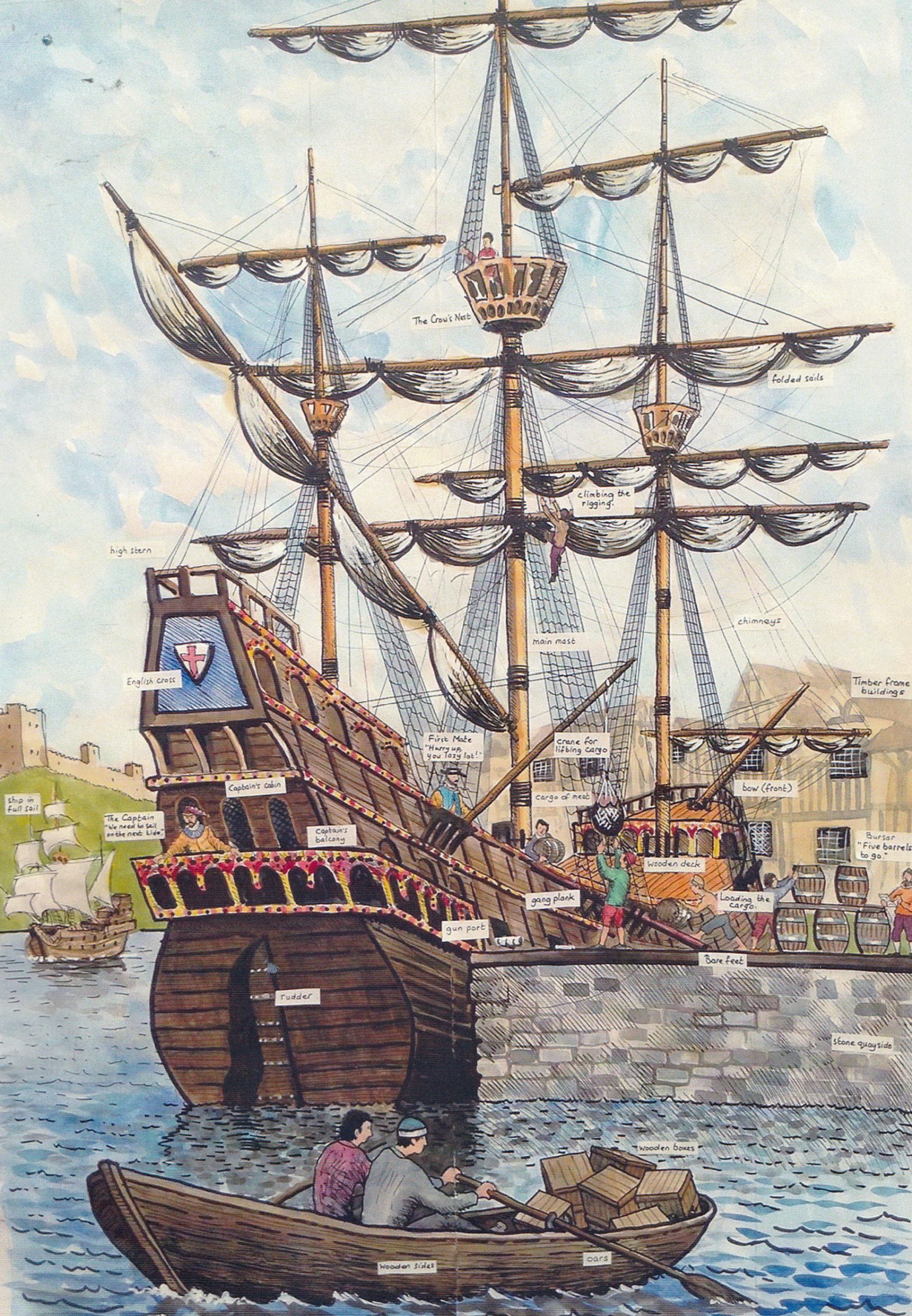 My daughter, a primary school teacher, was embarking on a Tudor project and asked me to paint a stimulus-type picture. No further encouragement was needed. I’d made models of such ships as a youngster and loved everything about them. This was the result. I wanted it to show not only the ship but the harbour environment and discussion details such as the loading of barrels and the captain’s section of the ship. I think it went down pretty well.

My grandson, Jamie, loves Thomas and Friends and all related material and programmes. One such programme “Kids Toys Play” centres around a family who play with (promote) related items, and the children receive their train presents in giant papier-mache eggs. Each egg depicts a well-known train from the series, and often its number. That’s what Jamie wanted so I made him one for a birthday. He loved it. I made a Christmas one. Then an Easter one, a Summer one! Here are most of the ones I made.

The joy is the breaking into the egg, usually with an elbow at a weakened point on it, then tearing it apart! And how were the presents put inside? Simple. Once each egg had dried through, and was painted, I turned it over, made four cuts (about 30cm), creating flaps. It weakens the structure so care is needed to slip the gifts inside. Then I glued and taped the flaps back together and left it overnight to dry. Effectively, you need best part of a week to make an egg of three layers, with adequate time for each layer to dry. But, boy is it worth it!

The little guitar, Jose Geetara, lies among the instruments and equipment in the dark and dank back room. Philip comes across him as he is tidying out the room, and gets such a shock when he hears his little voice. “Oh, seenyor Fleep. I theenk you are ‘ere for to ‘elpa me.”

This little character is a living, talking Spanish guitar who has hit upon hard times and languishes in the dark and dingy backroom of a Spanish music shop, dying from lack of food (music, that is.) All he needs is an English child (Philip) to come in, see him, hear his story and restore him to his former glory. Can you believe it, that is exactly what happens!! “Seenyor Fleep; I theenk you are ‘ere for to ‘elpa me.” Drama ensues.

it is one of my stories which I told to children when I was teaching and this one, in particular, was a corker. Drama, humour, tension, slapstick, emotion, music, yes, music. When Philip, who can’t play a note on any instrument, picks up Jose Geetara (the guitar), his fingers move on auto and beautiful music comes out. At this point in the telling of the story I play a simple but evocative piece (Spanish Ballad) which brings gasps from the children because they have so bought into the idea of the magic of the leetle geetar. The ensuing loss of Jose(stolen) and Philip’s return to England has them silenced. A dropping pin would be deafening! It was an advantage that, as a young man, I learned to play classical/Spanish guitar, not to a high standard but certainly enough to play this tune. Needless to say, I wrote this story to incorporate the guitar and also to teach the children something about guitars and the science of sound. It all linked in very well. Over the decades since I wrote it, (late 70’s) hundreds of children have enjoyed it.