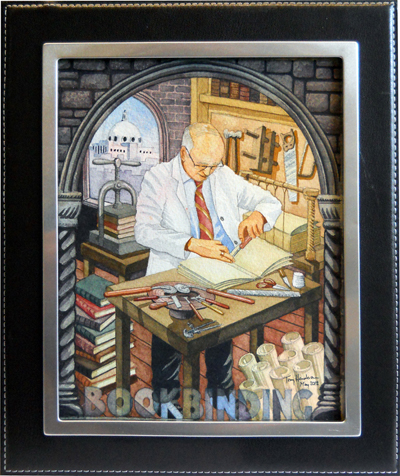 There’s a whole branch of my work which does not fit into the other categories – a loose association of cartoon drawing, pop-up cards, tributes to family, friends and colleagues for special occasions eg birthdays, retirement etc.

Quite often, it has been my choice to make something for someone, but in some cases I’ve been asked to do it for someone that I may not know.  At such times, I need a list of the key points relating to that person, and a photo or two, so that I can incorporate them into the tribute.

Of course, by the very nature of the work, they’re not in my possession anymore.  They’re long gone.  But I have photographed some in more recent times and a selection is included here.  The one you see above is a painting of our great bookbinding guru, David King, who retired at 80 in 2012.  Around him is some of the paraphernalia of the craft, with a reference to Whitley Bay through the window

For our grandson, Jamie, on his 7th birthday, it had to be a Thomas and Friends-related theme.  This is it.

The card shows an incident in one of Jamie's favourite episodes, when Thomas crashes through the window of the stationmaster's cottage, just as his family are having breakfast. I've replaced his family for mine (badly) with, from left to right, mammy, me, Jamie and nana.

It really helped to use a good watercolour paper. It can be bent into position and it will retain its shape. It worked especially well for the bricks and curtains, and it was strong enough for the figures. This card had to hold its own in terms of strength because, as you can see, it is not flat-fronted. Thomas himself sticks out and the family sticks out further so it needed to be given (NOT posted) in a box. So, before making it, I found a redundant toiletries box and made the card to fit. The reception it got made it really worth every minute of effort.
For the 47 year old, it's a birthday card showing our son working from home and showing the highest of standards in his behaviour and deference to his boss. What could be under the surface? Well...

But what about the book cabinet - so work-orientated, and the back room? 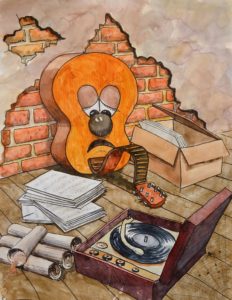 Abandoned in the back room

This little character is a living, talking Spanish guitar who has hit upon hard times and languishes in the dark and dingy backroom of a Spanish music shop, dying from lack of food (music, that is.) All he needs is an English child (Philip) to come in, see him, hear his story and restore him to his former glory. Can you believe it, that is exactly what happens!! "Seenyor Fleep; I theenk you are 'ere for to 'elpa me." Drama ensues.

it is one of my stories which I told to children when I was teaching and this one, in particular, was a corker. Drama, humour, tension, slapstick, emotion, music, yes, music. When Philip, who can't play a note on any instrument, picks up Jose Geetara (the guitar), his fingers move on auto and beautiful music comes out. At this point in the telling of the story I play a simple but evocative piece (Spanish Ballad) which brings gasps from the children because they have so bought into the idea of the magic of the leetle geetar. The ensuing loss of Jose(stolen) and Philip's return to England has them silenced. A dropping pin would be deafening! It was an advantage that, as a young man, I learned to play classical/Spanish guitar, not to a high standard but certainly enough to play this tune. Needless to say, I wrote this story to incorporate the guitar and also to teach the children something about guitars and the science of sound. It all linked in very well. Over the decades since I wrote it, (late 70's) hundreds of children have enjoyed it.

The cartoons are of members of the Modellers' Club which I belong to.
The first one shows an indomitable flier who is rarely phased by adverse weather conditions. It exaggerates that aspect. Wind, rain, snow, thunder, sun. The sheep are prostrate, the Angel of the North is bending, things are being blown all over the place. I showed the movement of the aircraft by repeating it in fading shades. I drew a template of the plane and repeated it to save the effort of matching its size, shape and position.

In the second cartoon, this accomplished modeller has just become a dad and I have, rather fancifully, imagined his future flying with added responsibility. The jet in the thought bubble is his actual model jet, a scary piece of kit. The Go-Jetters reference is to a Children's cartoon programme, with which he will surely become acquainted in the near future.

The third cartoon is more of a homage to a modeller who is a whizz builder. He makes fantastic models and his workshop is a modeller's dream. I've portrayed the wonder of his work through the eyes of a group of kids looking in at the window.  There are one or two hints at his profession and hobbies.